The 2014 NZSBK series certainly finished on a high note for the Tauranga based Superbike team, with 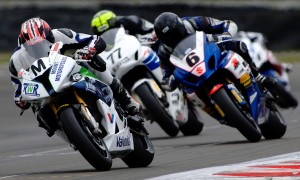 Team expectations shattered.
The world class racing saw the crowd rise to their feet in applause as the chequered flag came down and Linden bought the BMWS1000RR home, in first place.

With not one, but two victorious Superbike races won over the three day extended event at Manfeild Auto course, securing number two NZ, for the Valvoline sponsored BMWS1000RR M1Motorsport team.

It was a battle hard fought and won, not only on the track, but, behind the scenes.

Thursday and Friday were particularly frustrating for the Team as they struggled with set-up issues during Practice and Qualifying and the first race of the weekend.

“We just couldn’t get drive or grip out there” explained Linden.

So the team methodically persevered alongside Ohlin’s suspension specialists Robert Taylor and Red Fenton, until Saturday morning tackling a new direction which launched Linden from 7th on the starting grid, into the top 5.

“It was in lap two that I felt confident that I had the grip and drive that we’d been chasing.I knew I had to get good drive on my Pirelli tyres out of turn one as the Suzuki’s have great speed on the straights, I had faith that wherever I pointed the wheel, the BMW would go, and it did”

With several lead changes, the last few laps of the 15 lap race saw the Australian rider in a frantic dice with rising star Jaden Hassan. “As soon as Jaden passed me, I had to pass him back.”

Finishing with his first Superbike win in New Zealand or Australia, Linden has previously won the Super Stock class in Australian Superbikes, he had yet to win in the Superbike Class.

Linden also overcame the demon of a spectacular crash earlier in the season at Manfeild during the Suzuki Series.

“It was good to beat the demon, last time I’d raced at Manfeild – I was really lucky I didn’t leave in an ambulance!”

The final race of the series was about finishing and finishing dominant.

Determined Linden Magee declared “If I can win this [final] race, the points earned should see us in third or fourth position overall in the series.”  With a 20 lap race to rip into, Linden was caught up in 9th position.

“I didn’t panic on exiting the grid, I expected it would be a long ride on the technical track, the first four laps were about feeling the pace out, keeping my lines consistent and using the drive where I needed it most.” “I knew I was strong on the brakes, so I could start picking the front bunch off; one by one.”

On the epic “final lap pass”, Linden explains “I followed Dennis [Charlette] through turn one, turn two and into the “splash”. I know Dennis is slower through there. Dennis turned early and went wide; I turned late and drove round the outside of him.”

The surprise news of the series position points came as the Team were still celebrating their second win for the weekend.
Just one point separated second and third podium positions.
M1Motorsport celebrate their best NZSBK series finish since its inception.

Linden says “There’s a great depth of talent in New Zealand motorcycle racing, noticeably so with 8 winners throughout the series. It’s been a great experience to mix it up at the front with the locals. I’ve learned so much from my season in New Zealand, it’s really been a great experience. I’ve met a great bunch of people, my team have been so supportive and we work together really well.  I’m stoked to bring home the New Zealand Superbike number two plate for the team and our sponsors.

“Obviously if I’m invited back, my goal would be to bring home the number one plate.”

M1Motorsport acknowledge the absence of Nick Cole who was running 2nd in the series, following through a stellar season, up until the final round. We greatly missed Nick’s appearance on the grid and know the final round was a little less spectacular without him.

A big thank you to our fellow competitors, the organisers, media and everyone involved who made the 2014 New Zealand Superbike series such a fantastic event to compete in.

Special thanks to Travis Wearne who came out  from Australia to support Linden in the final round and to all the M1 crew members for their support,

Thanks must go out to our 2014 Sponsors, who without their generous input we wouldn’t exist.