Home » Racing News » Hoogie lights it up AMCC Championship Round 4

It was a hot start to the weekend, which only got hotter for Tauranga based Superbike Team M1Motorsport’s pilot; James ‘Hoogie’ Hoogenboezem, at the fourth round 2016 AMCC Championship, Hampton Downs.

“The Valvoline sponsored BMW S1000 RR felt great, we’d made a few positive changes which paid off during qualifying,
I was stoked to be on the front row, qualifying 3rd behind John Ross and Toby Summers.

Race One; I launched myself off the grid holding 3rd into turn one, into turn two passing John Ross into 2nd.
Coming onto the main straight, I managed better drive than Toby to lead until he passed me under brakes into the next corner.
I was sitting on the back of Toby for half a lap until he ran wide at the barrel, under brakes and handed the lead back over.

With Toby hot on my tail for most of the race, I maintained the lead through to the chequered flag.
John Ross stayed with us for about half the race until he lost the rear-end into the hairpin and high sided, which sadly ended his day.”

“Race Two’s start was a shocker, I’d lost a few positions sitting back in 6th as I headed into turn one, over a few laps I had made up the loss and charged into 2nd place, while at it reaching my ideal lap time for Hampton Downs – with a few very close high side moments along the the way.
Toby was 100m or so in front of me. I pushed hard to catch him but I struggled for grip, with making a gear change from race one.”

“Race Three; a similar start as race two putting me back in about 5th at turn one.  Passing two bikes through the first lap, then Andrew Stroud passed by, he must have got an amazing start off the back of the grid!
I felt like I had found my groove and put my head down to chase the lead group. Pushed hard in to turn one of lap two to close the gap. But I pushed a little too hard and lost the front to experience the fastest crash I’ve ever had which resulted in a DNF.
It was a nice smooth slide for me onto the grass but the Valvoline sponsored BMW had a bit of a rough time when it hit the grass, digging in and flipping into the air smashing it up quite good.
So our BMW’s looking a little sad at the moment.
I’m feeling very appreciative to be sponsored with such great race gear. My Rev’it race leathers and Oxford gloves received an absolute hammering at high speed but did their job so well that I walked away unscathed.”

James concludes “Despite the crash, the weekend’s racing was a lot of fun, the team enjoyed themselves. We made a lot of progress with settings on the bike which is great with the final National [NZSBK] round only three weeks away at Hampton downs.” 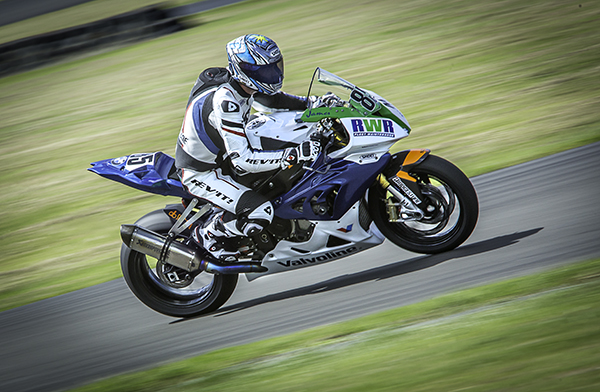 Local Tauranga businessman and Team Manager Robert “Moggy” Ramshaw says “James rode with some real aggression over the weekend, it’s the first time I’ve seen passion in James’ riding style, so we’re obviously getting the BMW  S 1000RR closer to James’ liking.
We made some changes to the suspension and electronics, when James came in post changes without pause he grinned and said very matter of factly “I like it”.

Robert explains “We’re starting to setup the bike so it’s “angrier” it stands to reason that if we can fine tune the set-up, our rider will be much more comfortable and confident and push that much harder.
It’s also the first time I’ve seen our rear Bridgestone tyre come off the bike looking so good.
When James came in with the bike on the trailer, after making sure James was ok – I laughed, I wasn’t bothered at all, it meant that he’s riding on the edge and he’s finding that edge. “ 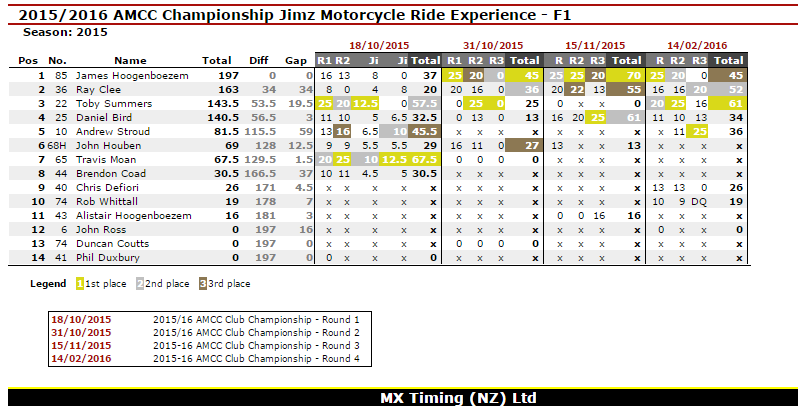