Magee all set to return to New Zealand. 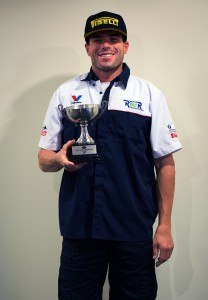 Joining forces again with the Tauranga based M1Motorsport team in another highly anticipated and spectacular season of Super-bike racing, campaigning the 2014/15 season on board the M1 Valvoline sponsored BMW S1000RR.

By the final showdown of last season, Linden and the BMW proved to be an outstanding and impossible to beat combination, winning a crucial two races – all that was needed to secure the necessary points for New Zealand Super-bike Championship number Two plate and, is rearing to contest the upcoming season.

“I’m thrilled to be invited back to NZ by M1Motorsport for the Suzuki Series and the 2015 NZSBK championship and looking forward to working with the team again.
I return with confidence as I know my way around all the tracks now and believe we have a real good chance of coming away with the NZSBK championship in 2015!! “

Linden will be winging his way over to New Zealand in time for the first round of the Suzuki Series – Hampton Downs, Sunday the 7th of December.
Keep up to date with our new look website and social media sites.

We look forward to catching our Sponsors and Supporters at the track!