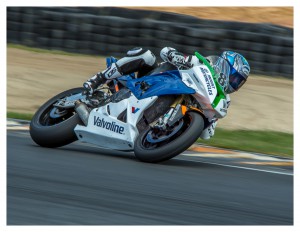 “We had a bit of an up and down weekend.”

“Wasn’t a good start Saturday morning, possibly setting the tone, we arrived at the track early Saturday morning to prep the race bikes, to find we couldn’t undo one of the locks on the trailer. A bit of handy work with the drill and we were good to go, kept things interesting.”

“Race one was a bit of a lonely race to finish 10th, I managed a good laptime, but wasn’t too happy with my placing.”

“In race two on Sunday morning, I caught a great start which gave me a chance to get in a few good passes in lap one but the pack in front of me pulled away. I charged through and eventually reeled them in by the end of the race.
While chasing down the group, I pulled my quickest lap through lap 14, the first time I broke into the .59’s with a personal best of 59.29 for the weekend and I held that pace throughout the remainder of the race.

“The Bridgestone’s have excellent tyre life, especially in the cold, they made it possible for me to pick off my brother on the second to last corner – the hairpin on the last lap, so I finished up 7th”.

The current Superbike lap record around Teretonga is held by Australian Robert Bugden, set in 2008 of 57.604.

“Race three, I lost a bit of time in the early laps running off onto the grass and back on track again. I expected I would be able to catch up again before the later stages of the 20 lap race.
Unfortunately by lap 5 I was struggling for rear end grip. So I raced another lonely ride to the end, to finish 9th.”

As the Supersport class James competed in previous years topped out at around 260 km, James while hitting a personal best, simultaneously joined the “300 club” for his first time this season on-board the Valvoline sponsored M1Motorsport BMW S1000 RR Superbike.

Asking James how he felt about the speed differential between Supersport an Superbike classes he said
“I don’t think I notice the difference in speeds at the end of the straight as at that time all I’m looking for is my braking point. Braking point is more important to think about than speed.”

Team Manager Robert Ramshaw said “It was a good weekend, unfortunately qualifying at the end of the grid didn’t give us much of a fighting chance and I’d missed the track temperature update at the 5 minute call before our final race for the round which can have a significant impact on tyre pressure, ergo results.”

“Good news is, during the Suzuki Series we were 3 seconds off the front runners, last weekend we were 1.5 seconds of the pace, now we’re only .6 seconds off the current race leaders.
James’s now hitting 300 odd km’s, so despite what the results say – in terms of our development we are coming along very nicely.”

James now sits in 8th position in the Championship as the 2016 New Zealand Superbike Championship heads to Levels Raceway at Timaru this weekend for Round three, before taking a break before the final showdown at Hampton Downs, 5th and 6th of March. 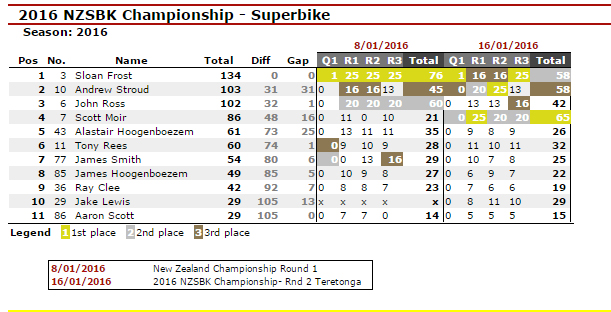