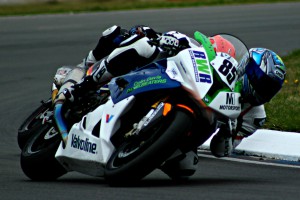 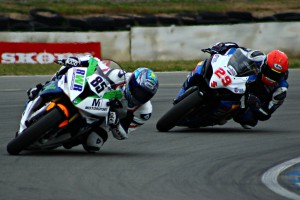 James says “It was a great weekend, I really had a lot of fun.
“Race One was my best result for the first round, finishing up in 6th position.

I finished 8th in Race Two, which was my most difficult race of the weekend.”

James explains “It was not a good start off the grid and being cold on the right side of the tyre, I didn’t have as much grip as I usually would and set off the traction-control hard through some of the right hand turns.
The upside is – I’ve discovered how well the traction control works!

Race Three, I finished 8th again, with 20 laps of great racing.
I have to say, the last few laps of race 3 was my best moment, and it was a lot of fun sliding the bike around on Bridgestones that had already lasted the distance of 15 laps while completing some of my fastest laps of the weekend.

Motorcycle racing is a family affair for the close knit Hoogenboezem family, with both James and brother Alastair competing in the Superbike class and younger sibling Matthew in the Superlite class.

“A few mins before I was due to head out on Sunday morning, I was informed my brother Matthew had a crash in Superlite tyre scrub session and was off to hospital with a broken leg, possibly both.
That made Sunday morning quite fraught.
Fortunately  later in the day Matthew was back with no broken bones, he’s walking around and should be back on track this week at Teretonga.”

Team Manager Robert Ramshaw said “It’s a good feeling to know we’re heading in the right direction, we’ve shaved down some more time, we were three seconds off the front runners when we finished up in the Suzuki Series, now we’re down to 1.5 seconds off the pace.”

The four round championship now heads to Invercargill’s 2.7km Teretonga Park circuit for next weekend’s second round, with the third South Island round a week later in Timaru.

“I can’t wait to get the M1Motorsport BMW out again at Teretonga, my favourite track for Round two of the New Zealand Superbike Championship, despite the weatherman’s forecast for rain.”

2016 New Zealand Superbike Championship Top Ten Results, at Round One.