After a sabbatical, the New Zealand Superbike series 2014 kicked back into gear with M1Motorsport’s Linden “Magoo” Magee qualifying fourth on the second row of the starting grid, finishing on the podium in 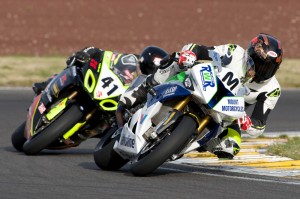 The final points saw M1Motorsport slip down a position in the series by one point.

Just  9 points stood between 3rd and 6th series positions by the end of Saturday’s racing.

Sunday wasn’t such a great day for M1Motorsport’s tenacious Gold Coast rider who suffered a minor crash during the first lap, which saw the Team finish with a DNF in Race two of Round three.

With Linden relatively unhurt and the Valvoline sponsored BMWS1000RR suffering only cosmetic damage, the Team were raring to get out again, eager to finish what began.

Unfortunately due to an oil spill the entire meeting was cancelled.

However, fortunes can change with 5 races to go for the series finale next weekend at Manfeild, held over three days as an extended event – the Team are looking forward to moving ahead in Round 4.

“Look, I’m very proud of what Linden achieved on Saturday, Linden’s shown what he’s more than capable of, we’re not here to dwell on what might’ve been in Race two and three [on Sunday] we’ve got a job to finish, let’s get on with it!”